For the past couple weeks I've been hacking at the Baroque Space Opera character sheet, trying to create something I like. It has been difficult because this is the first time I'm creating a character sheet, and I'm very picky.

The character sheet, a voidship sheet and the Lexicon will be included in the book when the print version goes to print (electronic will be updated as well).

So far, I've come up with this and I'm looking for feedback. 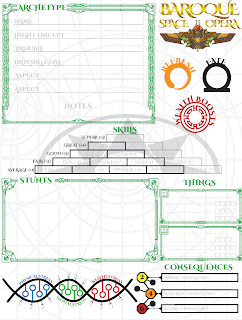 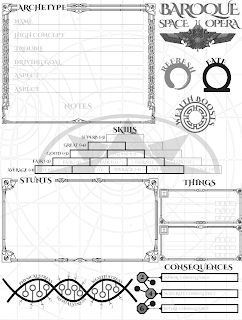 The character sheet tries to be faithful to the setting and contains:

A skill pyramid actually set up like a stepped pyramid, because the Baroqueverse loves pyramids!

Double helix stress tracks and genetic protein-like consequences. Baroque Space Opera deals with themes of genetic manipulation and this I thought was very fitting and neat for tracking stress. There are places outside the helix to write down what the value of each stress box is, if not default. If you don't have a stress box, the circle can be filled in.

The Refresh tracker is an Enso symbol, it symbolizes creativity and also happens to look like the Ouroborous, which symbolizes renewal.

The Fate tracker is a Shen, which symbolizes eternal protection--fitting for Fate points.

The Wealth Boosts tracker is the Chinese symbol for wealth.

The Stunts box is a bit big, but it gives you lots of room to write down your stunt notes, since Baroque Archetype stunts have more details than usual.

There is space for two Beneficial Things to record. They provide some boxes that can be outlined in pen to track Benefit and Trouble aspect usage. 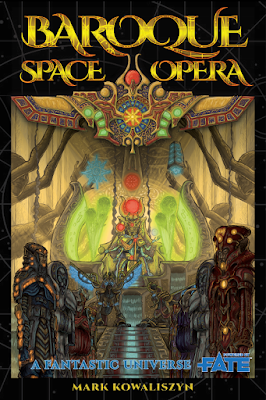 For more information about the setting and what to expect, visit some of my previous in-development blog entries: