What I really want to do is post all of the completed illustrations, but then I would have nothing for the book when it comes out. Rather, here are two scene concepts which have already been completed.

I previously introduced Baroque Space Opera in another blog post.

The Baroque Space Opera setting book will include 30 full colour illustrations to depict the Baroque universe, and the Fate Core systems to go with it. The book is a setting book, in the same vein as Day After Ragnorock, and will require the Fate Core book to play. Considering Fate Core is pay-what-you-will, this is a good deal! Not including rules reduces the time to completion, cost of printing, and the cost of the book.

Baroque Space Opera will include a write up of the Baroqueverse, character archetypes to base your character concepts on, additional Fate Fractals appropriate to the setting and an introductory adventure. Among some of the extras included are a psychic system, spaceships, vehicles, and a new take on gear. The rules will be open sourced to the community, because open source is the future.

The following scenes give some of the flavour of the setting. 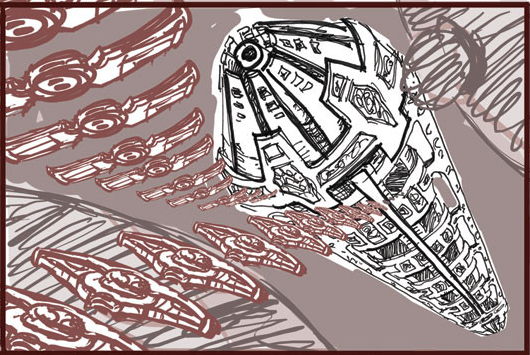 A bit of Dune bleeds through here. The Arkship is a massive space vessel capable of conveying other starships to far flung locations in a matter of minutes. Arkships operate on the secret technology of the Void Weavers, a sect of Theors who uncovered the secrets of the fabric of space-time. Using massive gravitational singularities, the Loom Drive tears a hole in the fabric of space and falls through towards its destination -- falling out on the other side. A Dominion-wide transportation network of these Arkships ferry passengers, cargo and news to the hundred planets.

In this scene, a fleet of house ships embarks onto the Arkship. House cruisers and destroyers heading to some far-flung battlefield, no doubt.

There are other means of space travel within the Dominion; the Loom Drive is but the latest and quickest method.  Many vessels utilize the superluminal drive, hurtling through space at faster than light speeds. Travel in the Baroqueverse is not limited to a set of jump gates, portals or routes. You can go anywhere, anytime. 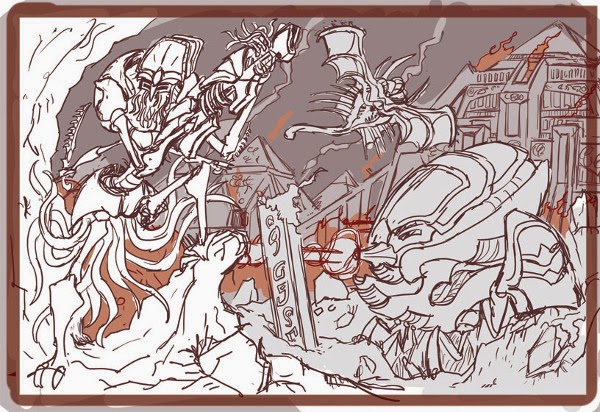 This is a scene of the sacking of Baroque, the capitol planet of the Dominion, and seat of power for the Dominion. During the Second Nihilim Invasions, the third incarnation of the immortal Tyrant was slain when Baroque fell to the Nihilim. This scene depicts a Voor, a Voorish war machine and a Brood flier. The Voor are masters of bio-mechanics, constructing semi-living machines and breeding a host of Brood horrors, each adapted to their function on the battlefield. As servants of the mysterious Nihilim Presences, the Voor act as shock troopers and breeders of the bio-mechanical engines of war employed by the other Nihilim slave races. The Nihilim Presences are masters over a number of species who originate outside this universe and pillage in the name of their mysterious masters.

This is a small taste of the Baroqueverse, and all the strange people, places, and things found within. The book is scheduled to go out when its done, and no sooner. :) The art is close to completion and I have some more writing to do. There's much editing to be done. I expect to be finished sometime this fall.