The Baroqueverse map shows all of the locations that are detailed in the Baroque Space Opera setting for Fate Core. The book contains a writeup of each location and region, as well as a number of story hooks that you can use to instantly jump into the action. The majority of locations contain Fate Core statistics for various critters, people, and voidships found at each location.

Space travel in the Baroqueverse is possible through the use of great voidships that ply the void between the stars. Voidships of the Baroqueverse come in all shapes and sizes; from the smallest two crew fighters to planetoid sized constructs crewed by thousands of individuals.

Voidships of the Baroqueverse are classified into three categories based on the drive(s) they are equipped with:

Lightpacers: Lightpacers can travel quickly, but cannot exceed the speed of light. This makes them viable for in-system travel, but impractical for interstellar voyages, which would take thousands and tens of thousands of years to reach the nearest systems. Every voidship is equipped with Lightpacer drives.

Lightracers: Lightracers are able to out-race light and are capable of traversing the great gulfs of the void in a matter of days, weeks, and months -- depending on the distance involved. These vessels make rapid jumps through the void and require careful calculations for each jump so that you don't fly right through a star, or bounce too close to a supernova -- that'd end your trip real quick.

Loomships: Loom Drives are the secret science of the Void Weavers sect; these drives are capable of generating a conduit through the fabric of space using a powerful gravitational singularity to connect two points in space -- no matter the distance. These drives permit near-instantaneous travel through the conduit.

The distance rings on the map are the relative distances of planets as measured from Baroque: the central planet and centre of the Tyrant's power. Distance determines the opposition when making Lightracer navigation calculations. Many navigators choose to split the trip into multiple legs, to reduce the difficulty of plotting course, and to make the voidship more difficult to track. Loom Drive navigation difficulty is determined by knowledge of the destination's gravitational anomalies and hazards.

This map is near-final. 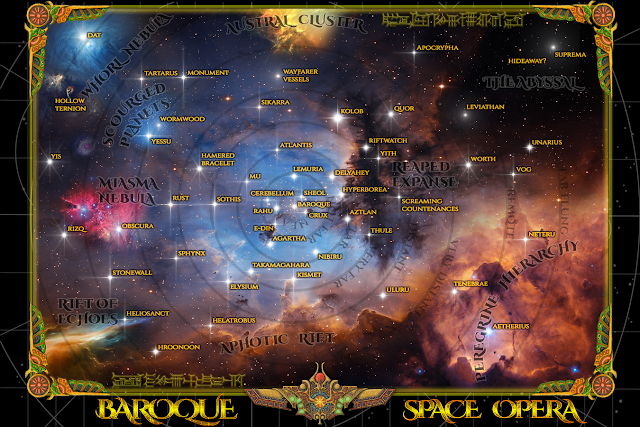