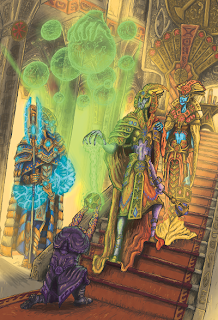 I finally got around to watching Jupiter Ascending. If there was a movie that espouses the look and aesthetic of Baroque Space Opera, then this comes pretty damn close. I loved the background and concepts, but the story was... trivially weak. It reminded me of Guardians of the Galaxy, another story that was incredibly weak. Both plots could be summarized in 2 or less paragraphs. Unfortunately that is the sad state of Hollywood films these days. :/

This entry is not about the plot though. Jupiter Ascending had many similarities with Baroque Space Opera, and that is why it kept my attention through the movie. I was more interested in the intricate scenes than the weak story.

The following is a list of very strong similarities between Jupiter Ascending (JA) and Baroque Space Opera (BSO):

All those similarities were quite striking to me while I watched the film. This kept me interested and watching. At the end, I could not tell whether I was disappointed or not because of the above. One thing is certain, I want to watch it again to look at the backgrounds, ships, and elaborate detail everywhere.