Mind Maps For Fun and Plot 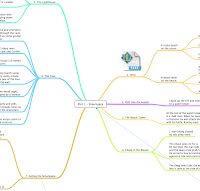 Every GM in the history of the hobby has struggled with how to best keep notes and design a game session. About two years back I started putting my ideas and session notes into a mind map. I never looked back since.

Mind maps are a way to visually outline information in a hierarchical tree-like fashion. They are, for lack of better words, a dump of your thoughts. In this respect, they make amazing notes for my roleplaying games.

During my years of gaming, I've learned a couple of things. The first being is that I dislike published modules. The primary problem with them is that when you get one, it's like studying for an exam before a gaming session. That, does not appeal to me in any way. I was never the one to study much during school. I certainly do not want to do that in my hobby. I prefer to have the entire adventure in my mind and the easiest way to do so is to make it up yourself.

The second is that prepping for a gaming session is damn hard. No matter how much effort you put in, you can never be prepared enough. One of the hardest things for me is to ensure that all the really wicked ideas I have get to see the light of day. I hate forgetting that amazing thing I planned for a story, only to remember after the session ended. For me, one of the most fun things is to throw out the awesome things brewing in my head and watch the players reactions. Forgetting them lessens the enjoyment of GMing for me.

I do not want to discount pre-written modules. I still buy them occasionally for games I really, really enjoy.  They are great source of ideas and additional background material. When using them, I steal ideas or locations and fit them into my story instead.  I cannot recall the last time I ran a published module, though. Most of the time, I rely on my own ideas; often inspired by novels and stories I have read.

When designing a session, I always pull out my trusty mind mapping software. I try not to write anything down until I have a general outline in my head. I find that sitting in front of a screen often results in writers block, unless I already know what I want to write down. Something about computers interferes with my creativity. Perhaps because I program them for a living. My logical brain switches on and takes over. Or something...

Once I have the basic premise in my head, I take down some notes. The notes are very brief, often just ideas or phrases which will remind me about the in-depth idea I have. I note down the most important things about that aspect of the story on the mind map. I try to keep the mind map light in information because reading too much during a session tends to interrupt it at the worst possible times. Just the facts!

The whole concept of a mind map is to note down only the important things. These are phrases and words which will remind you later what that idea was. At a glance, I can discern what it was that I wanted to include in the story. The fact could be a specific description I wanted to read out, something important for that part of the story or a specific event. This is really about organization rather than details. I structure the notes around scenes and locations for the most part.

Once the mind map is fleshed out and I have noted down the important things about the story, I link them together. The linking is important because it lets me associate the same important fact with multiple pieces of information on the map. It also helps me visually to see the relationship between these different aspects of the story.

Seeing the relationships and flow of the story visually is perhaps the most valuable benefit of mind maps for me. When the story goes off the rails and the players completely surprise me, I still have my visual representation of the story facts. I can quickly re-arrange them in my head and on the map and make them think I incredibly thought of everything.

I also use the mind map to note down important events and facts driven by the players. The mind map becomes more detailed during the story. At the end I have a complete view of what the story was, what the players did and any major outcomes. I also have notes about possible new ideas for the next session and what story elements I need to tie up later.

My current software preference is MindNode Pro. It is Mac only, unfortunately. I do most of my designing and writing on my Macbook Air anyways. Being a Linux user, I would prefer an open source solution. I've looked into a number of mind mapping apps and MindNode Pro always seemed to be the best choice. There are a number of nice open source software packages out there, including ones for your tablet (iOS or Android).

The following is an example of an Eclipse Phase mind map I created for a story very loosely inspired by Alistair Reynold's Pushing Ice novel. The Ice Baby Collective was hired to push a comet to Mars for the terraforming project. Contact with it was recently lost and Firewall sensors detected exotic radiation emanating from the comet. Considered a possible X-Threat, sentinels were dispatched to investigate. The mind map won't give you the full story, since that's in my head. But it is an example of how I structure them and it is one of the more involved ones with lots of notes. 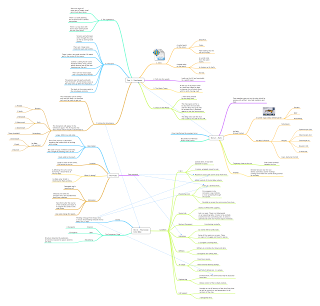 Email ThisBlogThis!Share to TwitterShare to FacebookShare to Pinterest
Labels: gamemastering